Yesh! It is true! Dawn has found another exciting anime! And ME, Ariadna AKA Dawn, will give you the info on it!

The heroine of the story, Amu Hinamori, is a student at Seiyo Elementary. At first glance, her classmates deem her “cool and spicy” and rumors speculate about her personal life. However, her real personality is that of a very shy girl who has trouble showing her true personality. One night, Amu wishes for the courage to show her “would-be” self, and the next morning finds three brightly colored eggs—red, blue, and green—in her bed. At first, she is alarmed, but realizes she must have really wished to change. These eggs hatch into three Guardian Characters: Ran, Miki, and Su. The Guardian Characters aid Amu in discovering who she truly is and help fulfill Amu’s dreams. Amu’s life becomes much more complex as she struggles to deal with her “would-be” selves and the Seiyo Elementary’s Guardians, who recruit Amu to search for X Eggs and X Characters, the corrupted forms of peoples’ dreams.

Meanwhile, the Easter Company is extracting people’s eggs in search of a special egg called the Embryo. The Embryo is believed to able to grant any wish to the one who possesses it. However, the process creates X Eggs and X Characters. 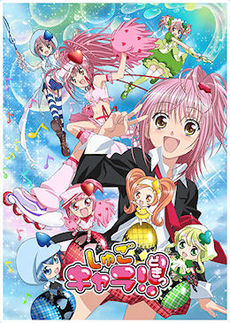 Amu Hinamori, the series’ protagonist, is a student of Seiyo Elementary. Amu’s classmates see her as “cool and spicy”, but Amu is actually extremely shy and timid. Part of the reason for this misunderstanding is the trendy punk  goth clothing her mother buys for her as well as the way in which she expresses her shyness and avoids doing new things which people interpret as ‘cool’. However, when Amu wishes for the courage to be reborn as her would-be self, three colorful eggs appear the next morning, which hatch into Amu’s three Guardian Characters: Ran, Miki, and Su. When one of her Guardian Characters Character Changes with her, she gets embarrassed because they make her speak in ways that she thinks are “totally out of character”.

Because of her three Guardian Characters, Amu became a member of the Guardians, the school’s student council, although she refused to join at first. Amu’s position with the Guardians is the Joker. Her task, as the Joker, is to search for and purify X Eggs, X Characters, and in the second season, Mystery Eggs, the corrupted forms of people’s would-be selves. Ran, Miki, and Su help Amu with her task through a process called a Character Transformation, which is enabled by the Humpty Lock and grants Amu special abilities depending on the Guardian Character. Later on, Amu also creates a fourth egg, known as Diamond. In the second season, when Amu shows her true potential, the Humpty Lock increases in power. Thus, new transformation scenes are used.

Amu’s two main love interests are Tadase Hotori and Ikuto Tsukiyomi. However, she has minor crushes, such as Kairi Sanjo, Kukai Souma, and Nagihiko Fujisaki but shows more friendliness. Amu’s primary rival is Utau Hoshina, an idol singer for Easter who is jealous that Ikuto shows an interest in Amu instead of her. Amu gains the Dumpty Key from Yoru and uses it to unlock the Humpty Lock. In the anime television series, Amu is voiced by Kanae Itō.

Ran
Ran is the first to hatch from Amu’s eggs and represents Amu’s desire to be more honest and athletic. Ran is frequently cheering Amu on. During Character Change, Amu gains increased athletic abilities. On Character Transformation, Amu becomes Amulet Heart. In the anime television series, Ran is voiced by Kana Asumi.

Su
The third Guardian Character, Su, represents Amu’s desire to be more caring and improve her domestic skills. However, Su is prone to silly mistakes. She is very fond of Amu’s teacher, Yuu Nikaidou, after helping Nikaidou realize that he was a good person and can still pursue his own dreams. Amu gains an improvement in cooking and sewing skills during Character Change, as well as becoming “too girly”. During Character Transformation, Amu becomes Amulet Clover. In the anime television series, Su is voiced by Aki Toyosaki. 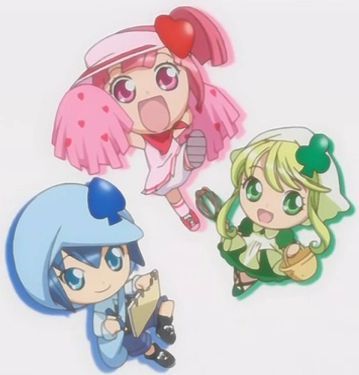 Diamond
Diamond is Amu’s fourth Guardian Character. She becomes an X Egg when Amu dislikes all the changes that were happening in the spring. While collecting X-eggs with Yukari, Utau finds Diamond’s egg inside the box. She soon hatches into a X-character. Unusually, she is not shaped like the usual X-character; she looks like a normal Guardian Character, but with a black X-shaped clip covering her yellow diamond-shaped clip. Because of this, Amu doesn’t know Diamond’s true name. In the Japanese manga, Diamond’s name is shortened to Dia. X-Diamond can Character Transform with Utau, becoming Dark Jewel, however, the transformation does not last very long. When Amu finally is able to purify Diamond, they undergo a Character Transformation, becoming Amulet Diamond. Afterward, Diamond returns to her egg until she sees that Amu “shines again”, but secretly comes out as a spirit at times. In the anime television series, Diamond is voiced by Kanae Itō. As X-Diamond, she is voiced by Miyuki Sawashiro.

Tadase Hotori  is a boy in the same year as Amu and serves as King’s Chair of the Guardians. Like Amu, he is actually a shy person and is not good at public speaking; instead, he Character Changes with his Guardian Character, Kiseki. Although he is popular with the girls, when a girl confesses their love to Tadase, he will have Kiseki reject her. However, whenever he hears the word “prince”, he Character Changes into an egotistical king who seeks world domination. Amu develops a crush on Tadase soon after she transfers into the school. His love interest is Amulet Heart, Amu’s Character Transformation with Ran, but it later becomes Amu herself. Tadase has known Ikuto and Utau since childhood, but he does not talk about it in detail until the Guardians are about to face Utau in their final battle. Amu and Tadase reconcile soon after, though. Later on, he agrees to help Amu save Ikuto from Easter. When Tadase was facing against Ikuto, his staff becomes a sword called Royal Sword. In the anime television series, Tadase is voiced by Reiko Takagi. 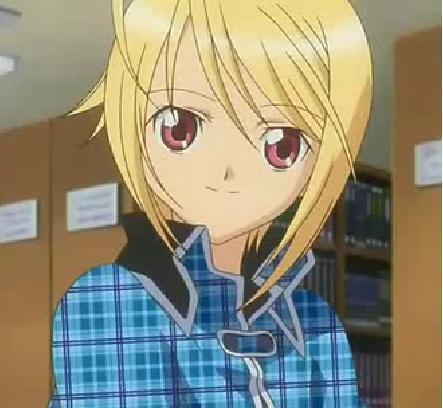 Kiseki
Kiseki is Tadase’s Guardian Character. Kiseki was born for a combination of Tadase’s desire to be stronger and the dream of world domination. Because of this, Kiseki is extremely egotistical and often demanding, and doesn’t like obeying others. He frequently calls other Guardian Characters to go on “Special Secret Meetings.” A running gag is that the other Guardian Characters will ignore him sometimes. Kiseki holds a grudge against Ikuto’s Guardian Character, Yoru. During Character Change, Tadase gains the confidence to overcome his shyness. However, sometimes Tadase will become an egotistical person who seeks world domination. Although Tadase could not Character Transform with Kiseki at first, they later gain this ability with the help of Amu after Kiseki’s egg gets tainted with an X, becoming Platinum Royale. In the anime television series, Kiseki is voiced by Kaya Miyake.

I got this information from: http://en.wikipedia.org/wiki/Shugo_Chara!

I got the pictures from google, by typing in: Shugo Chara! , in the images section.

P.S. I called Amu and Lau called Miki. Maybe she’ll change who she is, but for now she is Miki.

Hi there! I'm Dawn and this is my blog that's full of.. erm, stuff! I hope that we can be friends and that you enjoy this blog :3 END_OF_DOCUMENT_TOKEN_TO_BE_REPLACED
This entry was posted on Saturday, February 14th, 2009 at 7:17 am and posted in Uncategorized. You can follow any responses to this entry through the RSS 2.0 feed.
« New Story(SSSS?????)!
I Luv These! »